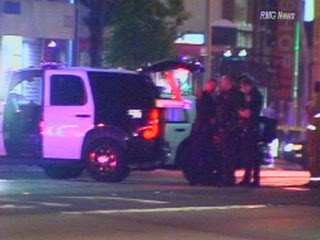 Santa Monica - A Santa Monica police officer shot by the passenger in a vehicle stopped for a DUI check was expected to survive, and the suspected gunman was also hospitalized after being shot by SWAT officers.

The police officer was shot in the abdomen, just below his bullet-proof vest, around 1:30 a.m. near Lincoln Boulevard and Bay Street, according to Santa Monica police Sgt. Jay Trisler, who said the officer was "doing fine" in a local hospital.

Police had pulled over a suspected drunken driver and were administering a sobriety test outside the SUV when the passenger opened fire, Trisler said.

The wounded officer, a 16-year department veteran, and his partner returned fire, but the gunman escaped, Trisler said.

Around 5:10 a.m., SWAT officers located the suspect near the scene of the original shooting, and more gunfire erupted, Trisler said. The suspect, who was hit at least once, was hospitalized in unknown condition.

The unidentified SUV driver, meanwhile, was in custody on suspicion of drunken driving.

A neighbor told a video news crew that he heard as many as nine shots about 1:30 a.m., went outside and saw several police officers chasing a suspect.
Posted by Amethyst A. Woodard at 12:07 PM No comments: