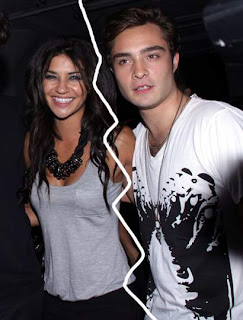 He ended it during an emotional phone call after discovering that Jessica had been allegedly getting cozy with his friend, heir Marco Minuto.

She freaked out and flew to London from El Lay to try and beg for his forgiveness, but Westwick is still really hurt.

"Jessica recently celebrated her birthday in LA and was being openly affectionate and flirty with Marco. They ended up back at the same hotel, but nobody knows what happened behind closed doors. Her flirty behavior shocked a lot of their friends, so word quickly got back to Ed, who has been filming in Europe.

He immediately ended their relationship on the phone, and Jessica, who denied anything happened with Marco, was so distraught that she flew to London last Friday with just the clothes on her back. She's been begging Ed to take her back, but he is deeply hurt. He can't believe that she carried on this way with one of his friends."

Her rep denies the cheating but if she did stray from Ed, she's a total idiot! The other man, Minuto, comes from a family with big $$$$ and attempted to sue Harvard when they refused to let him in.

SOURCE: perezhilton.com
Posted by Amethyst A. Woodard at 4:40 PM

Email ThisBlogThis!Share to TwitterShare to FacebookShare to Pinterest
Labels: Celebs