PHOENIX, Ariz. — Jared Loughner, head shaved, a cut on his right temple and his hands cuffed, stared vacantly at a packed courtroom Monday and sat down. His attorney, who defended "Unabomber" Ted Kaczynski, whispered to him.
It was the nation's first look at the 22-year-old loner accused of trying to assassinate Rep. Gabrielle Giffords.
The three-term Democrat lay about a 100 miles away in a Tucson intensive care unit, gravely wounded after being shot through the head but able to give a thumbs-up sign that doctors found as a reason to hope.
Loughner seemed impassive and at one point stood at a lectern in his beige prison jumpsuit. A U.S. marshal stood guard nearby.
The judge asked if he understood that he could get life in prison -- or the death penalty -- for killing federal Judge John Roll, one of six who died in the shooting rampage at Giffords' outdoor meeting with constituents Saturday in Tucson.
"Yes," he said. His newly appointed lawyer, Judy Clarke, stood beside him as the judge ordered Loughner held without bail.
The judge ordered Loughner held without bail. The next court hearing was set for Jan. 24.
Throngs of reporters and television news crews lined up outside the federal courthouse, where the hearing was moved from Tucson. The entire federal bench there recused itself because Roll was the chief judge.
Ammunition purchased hours before
Loughner bought his ammunition at a Walmart store hours before the shooting, the Wall Street Journal reported Monday.
He was turned away from one Walmart when he tried to purchase ammunition but was sold the bullets at another Walmart nearby, the Journal reported, citing people familiar with the case. Walmart later told the Journal that that Loughner was not turned away from the first store, but left before completing the purchase.
A Walmart official said Monday night that the company reached out to law enforcement after one of its employees recognized a picture of Loughner on television as someone who had been in a store.
"We stand ready to provide any information or video surveillance footage we may have to investigators that can help them as they work to determine all of the facts," said company spokesman Dan Fogleman in a written statement.
Also Monday, the Journal reported that Loughner's father has prepared a public statement. Citing a neighbor who met with the family, the Journal reported that the father, Randy Loughner, had written a statement, but wasn't sure when to release it. 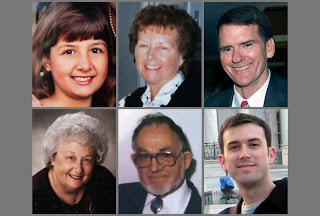 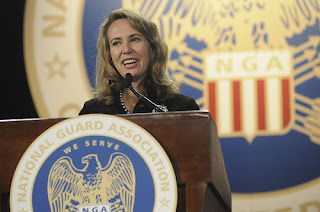 the Shooter .
Posted by Amethyst A. Woodard at 4:58 PM