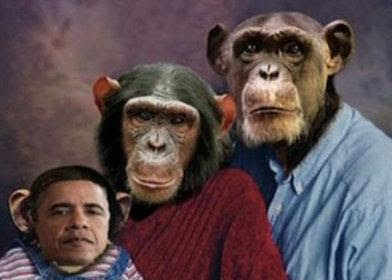 Californian Republican Marilyn Davenport, 74, who sent out an e-mail picturing President Barack Obama's face on the body of a baby chimpanzee, issued an apology late Monday after a weekend of criticism that ended with a strongly worded public rebuke from the local Republican Party chairman, who also called for an ethics investigation into the incident.
Marilyn Davenport, a 74-year-old elected member of the Orange County Republican Central Committee, sent an email Monday afternoon asking for forgiveness for her "unwise behavior," just before the local Republican committee met for its monthly summit at a hotel in Irvine.
The email sent on Friday by Davenport to a small group of Republican committee members shows an image posed like a family portrait, of chimpanzee parents and child, with Obama's face superimposed on the young chimp. Text beneath the picture reads, "Now you know why no birth certificate."
"To my fellow Americans and to everyone else who has seen this email I forwarded and was offended by my action, I humbly apologize and ask for your forgiveness of my unwise behavior. I say unwise because at the time I received and forwarded the email, I didn't stop to think about the historic implications and other examples of how this could be offensive," Davenport's apology read.
Is that Johnny Mathis and Deneice Williams we hear singing in the background? It was all kicks and giggles until members of her own party put her on blast. That's what it takes for some common decency? The GOP was up-in-arms when critics did something similar to former president G.W. Bush. That wasn't funny then and this isn't funny now. We've said it before and we'll say it again -- there are plenty of things to disagree with President Obama over, without invoking racist and harmful imagery. Davenport is too old to not know better. We're not buying her lame apology, which is insincere and too little, too
late.
Posted by Amethyst A. Woodard at 1:19 PM