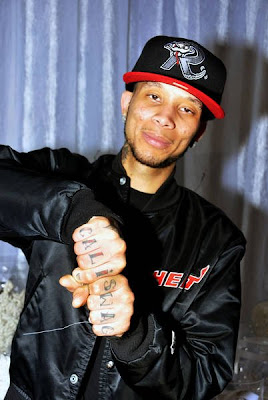 Montae Talbert, the rapper affectionately know as M-Bone from the music group  Swag District, was killed late last night in an apparent drive-by shooting in his hometown of Inglewood, California.
Montae became famous when his group released the smash dance hit ‘Teach Me How to Dougie,’ and his death comes as a shock to all. CNN reports the 22-year-old was sitting inside of his vehicle after leaving a local liquor store at 11:32pm, and a lone driver coming down La Brea Avenue pulled next to him and started firing at least two rounds of shots. He was hit in the head and rushed to the hospital where he unfortunately succumbed to his injuries. Though it’s still very early in the investigation, detectives are speculating that this was a ‘wrong place at the wrong time’ situation.
Smoove, the lead vocalist for Cali Swag District, tweeted:
“Ma life changed drastically in the. Blink of an eye rip mbone.”
This is so very sad.

Posted by Amethyst A. Woodard at 5:10 PM