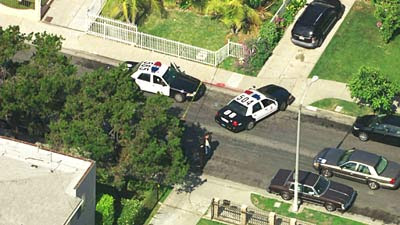 There's no word on a motive in the attack.

WEST LOS ANGELES -- Authorities are searching for two men accused in the shooting death of a pregnant woman and her unborn child in the South Robertson area of West Los Angeles.

The shooting was reported around 9:15 a.m. Wednesday in the 1900 block of Corning Street, according police.

Two men got out of a sport utility vehicle, walked up to the woman and shot her as she stood outside an apartment building with two male friends, according Sgt. Gary Levy of the LAPD's West Los Angeles division. As many as four shots were fired at the victim, police say.

The woman, who was 15 to 20 weeks pregnant, was taken to the hospital about three miles away, where she died.

Doctors attempted to save her unborn child, but the baby also died, Levy said.

The woman is said to have been in her 20s.

The suspects were described as two men -- one Hispanic and one African American -- last seen driving a gray Jeep Liberty.

There's no word on a motive in the attack, but police say the shooting may have been gang related.