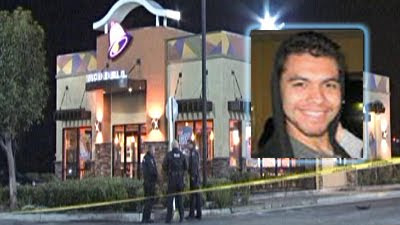 RIALTO, Calif. (KABC) -- The search is on for a gunman who shot and killed a 19-year-old going through a drive-thru in Rialto.

It is a devastating loss for Joshua Huizar's family. His family and friends are demanding justice for a life cut short.

Mourners gathered around a makeshift memorial, just feet away from the Taco Bell drive-thru where Huizar was gunned down.

"I just can't put it into words," said mother Elsa Huizar. "But I just want the person caught that took my boy's life. He didn't deserve that."

The deadly violence happened around 1 a.m. Sunday at the Taco Bell on the 12000 block of East Baseline Road.

Huizar's girlfriend, who was in the car with him, said it all happened so fast.

"It was like a dream," said Viridiana Sanchez. "We were just hungry, and wanted to come here and eat. And that guy just pulled up, pulled a gun out. He wanted to rob us, but we didn't have money. He got mad, and he shot him."

Sanchez said the gunman walked up to the car and wanted money and their cellphones. That's when Huizar tried to drive away, but the suspect opened fire.

Paramedics tried frantically to save Huizar's life, but he was pronounced dead at the hospital. His girlfriend wasn't hurt. Police are now searching for the killer.

"He should be considered dangerous," said Officer David Shepherd from Rialto Police. "The detectives are looking at similar crimes that may have occurred in the area, to see if there is any commonality and looking at any leads that they may have to find this guy."

At this point police only have a vague description of the suspect. Huizar's friends and family are asking for the public's help.

"I want to see him caught," said Rosa Jimenez who is Huizar's aunt. "So he doesn't do this to anybody else."

Detectives are checking the restaurant security cameras to see if there is a good shot of the suspect. If you have any information call Rialto Police at (909) 820-2590.
Posted by Amethyst A. Woodard at 12:00 PM